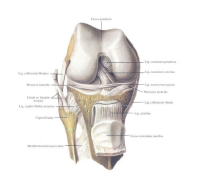 The cruciate ligaments are the most important passive stabilizers of the knee joint. Their name comes from the fact that when looked at head on, they cross each other diagonally to form an X.

The ACL prevents anterior tibial subluxation, i.e. it prevents the shinbone from sliding out in front of the thighbone. It also prevents internal rotation. Anatomically it consists of several bundles, chief of which are the two major ones – the anteromedial (AM) bundle and the posterolateral (PL) bundle. They differ in function, somewhat – the PL bundle restricts the tibia from anterior subluxation (slipping forward) and from inner rotation in relation to the femur, when your knee is straight or slightly bent. The АМ bundle restricts almost the same exact movements, but in cases where the knee is more than slightly bent. But the function of the ACL is not exhausted with just stabilizing the joint. It also plays an integral part in regulating the mechanics of motion in the articulation surfaces, as well as distributing the load across the joint. Consequently, damage to the ACL increases the risk of arthritis in the knee, and could make it worse if already present.

The causes of injury (stretching, partial or complete tearing of the ACL) are the same as with other ligaments in the human body – it comes down to subjecting them to forces stronger than their tensile strength. The most common mechanism of injury involves heavy overexertion or strong external forces (in contact sports) at a moment when the supporting leg is slightly bent at the knee.

The fact that a torn ACL takes upwards of 6 months to fully recover speaks to the severity of such an injury.

Some of the factors that can contribute to the risk of injuring the ACL:

In either of the above mentioned situations, the knee could give out medially in what is known as a valgus collapse. This happens when the knee, thigh and ankle are not properly aligned during heavy strain.

Sex is also a risk factor, with women being more prone to ACL injuries.

Prevention: ACL injuries are common with athletes as well as amateur sports players. The way to prevent them is to address the potential risk factors on a case by case basis, as they will vary from person to person.