Home › Spine and Back Pain

Standing up straight has many benefits but it also increases the load put onto the spine.

The spine is made up of 7 cervical, 12 thoracic, and 5 lumbar vertebrae. Underneath those is the sacrum, which comprises 5 fused vertebrae. And finally, we have the coccyx at the bottom, consisting of 4 to 6 fused vertebrae. A healthy spine is shaped like an S, forming 3 slight curves. These are known as cervical lordosis, thoracic kyphosis, and lumbar lordosis.

Bad posture, lack of physical activity, and prolonged sitting cam all lead to changes in this curvature – hyper- or hypolordosis, hyper- or hypokyphosis, and scoliosis.

Between the vertebrae are the intervertebral discs. They reduce friction and serve as shock absorbers, and they ultimately reduce the weight that’s put onto the vertebrae. Each disc consists of a fibrous ring (annulus fibrosus) and a soft, gel-like nucleus (nucleus pulposus). Two neighboring vertebrae and their intervertebral disc form a unit known as a spinal segment or a vertebral segment. This is an area where degenerative processes and/or pain can manifest very frequently.

The reasons for back pain are many: a sedentary lifestyle, lack of physical activity, age, genetic factors, trauma, among others. Statistics show that over 80% of the population experiences back pain. Degenerative processes tend to start with the discs – they may lose their elasticity, become deformed, microtears in the fibers of the annulus could form, the intervertebral space could narrow, the disc could slip out of place, and even the nucleus can spill out if the annulus is torn. All of these changes lead to a lot more strain being put on the vertebrae.

Spinal deformities are caused by dislocations of the vertebrae. When this happens, they are improperly positioned and this can lead to pressure being applied to the surrounding nerves. Another reason could be weakened spinal musculature due to a lack of physical activity and/or holding an incorrect posture for extended periods of time. Spinal deformities and pain can lead to: migraines; numbness in the arms, hands, legs, and feet; chest pain; changes in pelvic tilt; loss of sensation.

The pain can be severe, and it can be brought on by trauma or certain motions. It most frequently emerges in areas where a mobile segment connects to a static one (e.g. lumbar areas L4-L5 or L5-S1).

As mentioned previously, degenerative changes in the spine and its segments could be present. These can manifest in other areas with shooting pains, e.g.: neck pain that radiates down to the shoulders and arms; neck pain that shoots into the head; and sciatica. 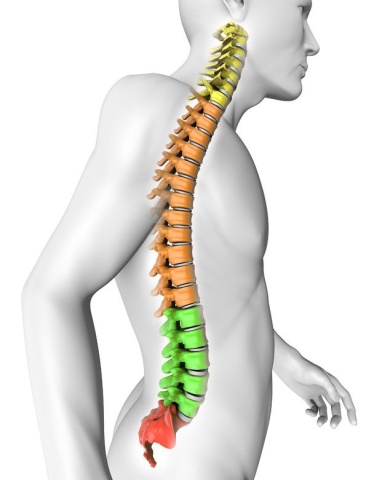