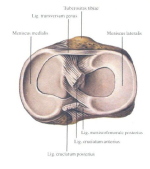 The menisci are two C shaped pieces of tissue located between the articulation surfaces of the knee joint, between the femur and the tibia. They are made up of a mixture of fiber and cartilage called fibrocartilage, and act as a shock absorber inside the knee joint. They line the joint’s surface, like two cushions that reduce the friction, pressure, and strain put on the joint in our daily lives.

There’s the external or lateral meniscus, and the internal or medial meniscus (meniscus lateralis et medialis). Their purpose is to stabilize the knee joint during movement and absorb some of the load. The femur and tibia are structured in a way that makes the joint shallow and flat. This is a risk factor, which could lead to injury with certain motions. The menisci are what prevents or reduces the risk of this happening.

Certain movements in the knee joint can cause trauma or damage to the meniscus. These tend to be sudden movements, which the active stabilizers of the knee are unable to adequately account for, leading to excessive strain on the passive stabilizers and the joint capsule. This in turn gets carried over to one or both menisci. Meniscus trauma can be of low or high severity. It is also possible for a slight injury to turn into a serious one over time. The main issue with meniscal trauma or damage is that the meniscus is virtually irreplaceable and doesn’t regenerate or self-heal.

Meniscal injuries and issues include:

Treatment options can be conservative or surgical, depending on the severity of the injury. Conservative options involve physical therapy, which helps reduce any swelling and pain caused by the trauma. The functional phase focuses on strengthening the thigh muscles and restoring balance and stability to the knee.

Surgical treatment options depend on the nature and extent of the trauma. Nowadays the most common approach is arthroscopy, which aims to repair the damaged tissue in a minimally invasive way. Partial / subtotal meniscectomy (removing part of the meniscus) and meniscus suture repair are two of the most common surgeries.

Prophylaxis: maintaining a healthy body weight; performing knee activities correctly with an emphasis on thigh, knee, and foot position; programs for strengthening the thigh muscles, improving the balance and stability of the knee. 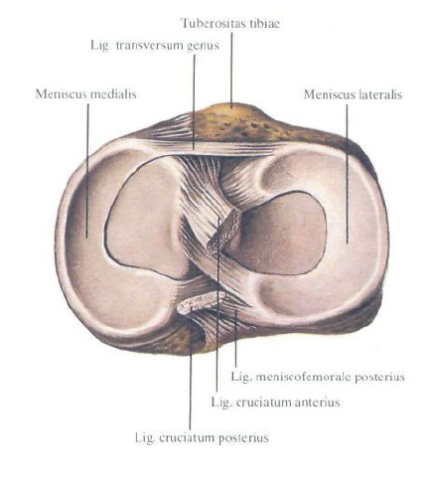